When Cells Undermine Their Own Purpose – Part 1

Our bodies have a built-in process that is believed to be a protective mechanism called cellular senescence. As we age, this process slows down and can result in disease.

The biological definition of aging is the many processes of cellular damage accumulation in the body. These are known in the scientific literature as the Nine Hallmarks of Aging. We’ve covered the first four, or primary, hallmarks: genomic instability, telomere attrition, epigenetic alterations, and loss of proteostasis, as well as the first two of the antagonistic: deregulated nutrient-sensing, and mitochondrial dysfunction.

The role of the antagonistic hallmarks is to respond to and block the damage caused by the primary hallmarks. Yet, when bodily conditions become chronic and/or aggravated, they end up contributing to cellular damage and can accelerate aging. The seventh hallmark, and third of the antagonistic, is cellular senescence. Senescence plays roles in normal development, maintains tissue homeostasis, and limits tumor progression. If you’ve read any of my blogs in the past, you know this is one of my favorite topics.

The miracle that is us

It varies depending on the cell, but the division cycle of a typical human cell averages 24 hours, which is mind-blowing considering the complexity of what takes place. 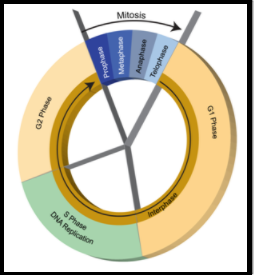 Our cell cycle has four stages:

A fine line between helping and hurting

In my best-selling book, The Longevity Equation, I point out that, “When your cells have had more than enough DNA damage, stress, and telomere shortening, they enter a state of growth arrest known as cellular senescence. This function is put in place to prevent damaged cells from turning into cancerous cells. However, in the process, it also stops allowing worn-out tissue to be replenished and rebuilt. Senescent cells often secrete inflammatory molecules that further damage the cellular environment, leading to chronic inflammatory conditions, including heart disease and osteoarthritis.”

Cellular senescence inevitably halts the cell cycle during the G2 stage, as a result of excessive intracellular or extracellular stress or damage, such as oxidative stress, DNA damage, and telomere erosion, or when they overexpress certain oncogenes (have the potential to transform into a tumor cell). Once this process starts, it is irreversible.

Similar to the other antagonistic hallmarks of aging, this process is meant to prevent the proliferation of damaged cells and helps to suppress malignant cell formation. However, as time goes by, our bodies begin to accumulate these senescent cells, which leads to the deterioration of the tissue repair mechanism that usually accompanies senescence.

More on Thursday in Part 2!