It's safe to say that regardless the sport, most spectators enjoy a burger, sausage, or hotdog alongside their cold Bud and Cracker Jacks.

Stadium food is as part of game-going tradition as the sport itself. And this sentiment extends all over the world...

It seems Americans are not the only ones who enjoy a meaty treat while taking in the action on the court, field, or ice.

Various forms of sausages, hot dogs, hamburgers, and meat sandwiches are the crowd favorite in nearly every culture I researched regarding sporting events — especially soccer. 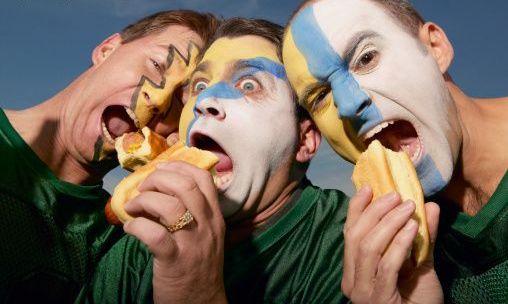 In the Netherlands and in Austria, fans enjoy a hot coffee with their hot dogs and hamburgers...

And then there's the meat-filled sandwich: In Turkey, you can order a Kofte sandwich, which has a meatball-style filling.

Spaniards love their bocadillos filled with ham or spicy sausage and the Italians look forward to ordering a massive grinder-type sandwich filled with grilled sausage, peppers, and onions from a truck outside the stadium.

Meat pies are the most popular spectator snack in many nations around the world.

You see the pattern here: Meat is the overwhelming choice for sports fans.

So one can imagine the shock when the owner of a British soccer club recently banned meat not only for the players, but for the spectators, as well...

Dale Vince is the owner of the Forest Green Rovers, an English football club based in Nailsworth, Glouchestershire. Vince, who became a major shareholder of the club in 2010, became the club chairman just three months after joining the organization.

Vince is a longtime environmental businessman and vegan. He owns Ecotricity, a cleantech company established in 1995 and also based in Gloucestershire.

Ecotricity builds wind turbines and other forms of alternative power. In 2004, he was recognized by the Queen for his services to the environment, and awarded an Order of the British Empire (OBE).

Vince first banned red meat as a part of his players' diets a few weeks ago for health reasons.

"Following discussions with the manager and on nutritional advice, it was decided to no longer feed our team red meat for health and performance reasons," the team's communications director, Tom Williams, said in a press release.

Vince decided this month to extend the policy throughout the stadium in a sustainability measure for his organization.

"If red meat was not good enough to feed our players, then it wasn't good enough for our staff, fans and visitors too.

And he's unapologetic to those fans who scowled at the thought of missing out on a meat pie or bap during halftime.

"At its worst it means once every two weeks watching a football game without being able to eat red meat... Anybody that really needs it can bring a ham sandwich or something if they wish — that's no problem."

Free-range poultry and fish from sustainable stocks will be served up at the Blue Square Premier club, as well as a lentil burger and other items.

And as Williams explained, the club's catering staff is working hard to develop a menu of "tasty and interesting products" to replace the traditional beef and pork-based favorites.

"This is obviously a break with tradition, but we hope many will come to see it as a step forward. I think the old sausage bap won’t be much lamented."

I'd be interested in see what difference (if any) Vince's meat ban makes on the club's bottom line this season. Will fan numbers decrease at the stadium as the result of the food being offered? Will tailgating take on a whole new level of grilling?