The Latest Showdown in Organic vs. Conventional Farming

It's a long-standing debate among farmers, environmentalists, corporate seed giants, and the United States Department of Agriculture.

What benefits, exactly, would a transition to organic agriculture from the present conventional methods farmers use provide?

The Rodale Institute's Farming Systems Trial (FST) has, over a twenty-year study, focused on just that. The trial demonstrated organic farming improves soil and water while simultaneously yielding crops of similar (or better) quality and net returns as conventional farming does.

FST's research sought a comparison between conventional and organic agriculture for in corn and soybean production, particularly in the Midwestern United States. Corn/soybean production was selected as the focus of this latest study becau 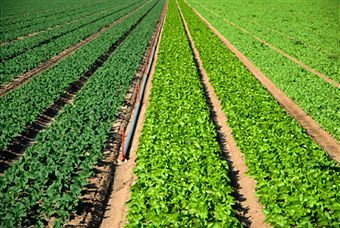 se these crops require large land areas to grow, and are primarily harvested as animal feed.

1. Manure-based (organic) farming represents an organic dairy or beef operation, based on a long rotation of annual feed grain crops with perennial forage crops, creating a primary line of defense against crop pests and disease. Leguminous crops and manure fertilize the crops in this system.

3. Synthetic-based (conventional) farming represents the methods used on the majority of grain farms in the United States today, wherein synthetic nitrogen is used for fertility, and weeds are controlled with synthetic herbicides.

The study measured each system in terms of its effct on water and soil, its energy use, and the overall crop yield (volume, quality, and pest resistance).

When it comes to the surrounding environment, the award goes to...

When it comes to energy consumption, the award goes to:

When it comes to the bottom line, the award goes to:

For this particular study, only the cash grain systems were compared; the legume-based system represents organic agriculture and synthetic, conventional.

After twenty years and the consideration of many factors, the economical benefits of organic farming can't be measured simply in terms of dollars, cents, and crop yield.

During the first years of the study, net returns for the two grain operations (the legume and synthetic systems) were the same during the 1980s and 90s (assuming crops were priced comparably at market).

In terms of spending, the organic systems required more funding for seed and equipment at the out-start, whereas the bulk of dollars for the synthetic, conventional system went to pesticides and fertilizers.

Even with the inclusion of the transition costs (such as potential loss of yields in start-up years) and family labor costs, the organic price premium required to equalize the organic and conventional returns was only 10% above the conventional product.

Throughout the 1990s, the organic price premium for grains exceeded that level, and premiums ranged between 65% and 140%.

To recap, farming methods tested over two decades with three systems and various factors indicates organic agriculture trumps conventional in the arenas of water, soil, and energy input and output quality... and crop yields of corn and soybean were nearly equal.

Keep in mind this wasn't a backyard experiment in growing tomatoes or cucumbers to see which produce ripened better and with fuller color, resisted pests, had a longer shelf life, or passed a consumer taste test...

This trial focused on the major agricultural model and crop for the Midwest: grains used for animal feed.

So why then has the USDA not pushed for grain farmers in the United States to transition, at least regionally or regarding certain specific fertility methods, to organic farming?

The underlying issue for environmentalists and consumers alike is how we can empower growers and agriculture companies to take matters into their own hands and escape the grasp of the man behind the curtain...