The Deadly Truth About Aluminum

His peaceful morning routine was interrupted when he noticed something grotesque — the river bed was covered with dead fish.

Meanwhile, at the local Water Works, the phone was ringing off the hook. Pitch black water was pouring out of people's taps. It curdled the milk in their tea. It clung to their skin and hair instead of rinsing off when they showered.

Susan Jones was on duty at the call center that day. “I realized something was seriously wrong” she says, “when I got a call from a woman whose husband had got out of the bath and his hair was sticking together like Super Glue.” 1

She adds that even though she knew it was “extremely dangerous,” her bosses told her to reassure people. “I was told there was no health risk,” she says. “I was told it was safe to drink.”

So people drank it. And they gave it to their farm animals.

The sheep were the first to start dying. Then the cows. “When you hear of animals dying — big animals,” Doug Cross says, “and then somebody says 'oh, it doesn't affect humans,' you know that they're lying.” 2

Among the townsfolk, strange problems started occurring. People would stop their cars in the middle of the road, having forgotten where they were going. Others would come out of a mental fog to find they were driving on the wrong side of the road. Incidents like this became commonplace.

What Went Wrong in Camelford

After 16 days, the South West Water Authority admitted that the water supply had accidentally been poisoned with 20 tons of aluminum sulfate.

It was human error. A new truck driver had emptied his 20-ton load of aluminum sulfate — used in small doses to clear water of solid particles and cloudiness — directly into the drinking water lines instead of a storage tank.

For the town of Camelford, the tragedy was far from over.

Her death was so odd — and suspicious in light of the toxic aluminum event — that coroner Michael Rose asked police detectives to investigate and a formal inquest was made into her death.

An expert was called in to examine Carol Cross's brain tissue...

“The neurotoxicity of aluminum is without doubt.”

His laboratory has measured more brains for aluminum content than any other group in the world, so it was no surprise that authorities reached out to him to study Carol Cross's brain.

He makes it clear that humans have no biological use for aluminum and says “the neurotoxicity of aluminum is without doubt.”

Exley says that the only normal level of aluminum is no aluminum, but “the reality is that we ALL have aluminum in our brain—something like 1 or 2 micrograms of aluminum per gram of tissue dry weight.” 3

In Alzheimer's cases this figure usually moves to around five or six micrograms per gram of dry weight brain tissue. So how did Carol Cross's brain tissue samples measure up?

"We found 23 micrograms per gram of dry weight,” he says, “which is almost unheard of and one of the highest levels we've ever measured.”

Not surprisingly, coroner Michael Rose accused the South West Water Authority of “gambling with as many as 20,000 lives.”

Thing is, Carol Cross's fate was no singular case, and to this day, the town of Camelford is plagued with bizarre and often merciless medical issues.

One family, six disabled children — is aluminum to blame?

Recently, Exley was contacted by the Matta family, who believes their children — six out of seven are severely disabled — were blighted by the aluminum water incident, or as the Guardian calls it, “Britain's worst mass poisoning of modern times.”

“For years,” the Guardian reports, “the couple have struggled to understand why their children — two of whom use wheelchairs — have problems including delayed development, anxiety issues, speech problems and possible autism.” 4 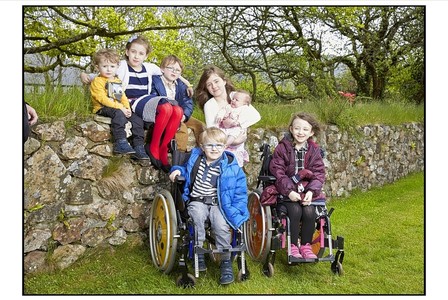 Photo courtesy of the Cornish Guardian

At last check, six out of seven also suffer from a condition called Ehlers-Danlos Syndrome (EDS). Time will tell for the couple's seventh child, baby D'arcy, who was too young to be tested.

When their mother, Sarah Matta, reached out to Dr. Exley in 2012 and had her blood sampled, pieces of the puzzle finally started fitting together.

The lab test found astronomical levels of aluminum in her blood — 20 times higher than normal.

“Aluminum is toxic,” Exley says. “Studies in animals show that if you feed mothers aluminum in the water supply, the offspring will exhibit developmental problems.” 5

As of 2012, 148 victims of the Camelford water poisoning had received out-of-court settlements for lasting health damage.

One of the illnesses most frequently linked to aluminum exposure is Alzheimer's Disease.

Though this link has been called controversial by some, a recent study in the Journal of Alzheimer's Disease clearly states that, “Research reveals that very small amounts of Aluminum are needed to produce neurotoxicity.” 6

The study also points out that aluminum toxicity “reproduces the hallmarks of Alzheimer's Disease.”

“Immediate steps should be taken to lessen human exposure to aluminum, which may be the single most aggravating and avoidable factor related to Alzheimer's Disease.” 7

Aluminum is also associated with increased heart attack risk. In fact, a study cited by Health Wire' s own cardiologist Dr. Jack Wolfson demonstrated that blue collar workers at an aluminum smelting plant were twice as likely to suffer from ischemic heart disease. 8

According to the Aluminum Association, 25.5 billion pounds of aluminum were used in the U.S. in 2014. 9 It's a $152 billion industry and accounts for roughly 1% of our GDP.

It's the third most abundant element in the earth's crust, and from cans to cookware to vaccines to two-thirds of deodorants — the stuff is everywhere.

Here's a simple 5-step action plan to help you avoid aluminum and get it out of your body:

This piece of advice tops cardiologist Dr. Jack Wolfson's own aluminum avoidance protocol. Instead, he recommends using stainless steel cookware, like that manufactured by SaladMaster. Ceramic cookware is another great option. Many crockpots are ceramic, allowing for low-involvement, aluminum-free meals.

According to Dr. Wolfson, “The best way to get toxins out of our bodies is through regular bowel movements and a high urine volume... lots of fiber and fluids should ensure we achieve this goal.”

Make sure you filter your water so you're not introducing new toxins into your system. Every body has a unique need for water, but a good rule of thumb is to drink about half your body weight in ounces. For instance, a 150-pound individual should drink about 75 ounces, or roughly 2 ½ quarts per day.

“Whether through exercise or in a sauna,” Dr. Wolfson says, “sweat is proven to contain heavy metals.” Most people are aware that when you sweat, your body releases toxins... but most people probably don't know that ridding your body of this extra burden greatly improves heart health.

In fact, a study published in JAMA Internal Medicine found men who used a sauna four to seven times per week were 63% less likely to suffer a sudden cardiac death. 10

Standard steam saunas, infrared saunas, hot yoga, or something as simple as a brisk walk are all good ways to work up a sweat.

Wolfson advises all his patients to avoid unnecessary vaccines, since many of them contain aluminum.

Truth be told, aluminum turns up in a lot of unexpected places and products. I already pointed out that it's an ingredient in two-thirds of available deodorants... but did you know popular over-the-counter heartburn medications like Pepto Bismol and Mylanta also contain aluminum?

Here's an extensive (but by no means exhaustive list) of consumer products containing aluminum.

Not to mention that aluminum cans are yet another reason to kick that nasty soda habit.

The word chelate comes from the ancient Greek word for claw. As Wolfson puts it, a chelator is “any type of molecule that can claw onto or bind a metallic element, allowing it to be excreted by the body.”

It sounds rather scientific, but many excellent chelators are actually familiar foods. Garlic and cilantro are both great chelators (as well as flavors), so try adding more of each to your diet.

One of the best natural chelators available is chlorella, a blue-green algae and veritable superfood. It's widely available in green drinks and supplements. Make sure to get “cracked cell wall” chlorella, otherwise your body can't absorb it properly and the chelation benefits will be lost.

Start with the simple steps above, and you'll be well on your way to ridding your body of excess aluminum.