More on the powerhouse of the cell: mitochondria.

And how they tie into something very important known as "ATP."

You see, in the electron transport chain, a cluster of proteins transfer electrons through a membrane within mitochondria, which releases energy that is used to form an electrochemical gradient that drives the creation of adenosine triphosphate (ATP). Without enough ATP, cells are not able to function properly, and, after a long enough period of time, may even die.

Unfortunately during the process, mitochondria also produce most of the free radicals, or as scientists like to call them: reactive oxygen species (ROS). Mitochondrial dysfunction is mediated by several processes including increased production of ROS. Until recently, some researchers believed that ROS were the main cause of aging. However, studies have shown that purposely lowering ROS did not have a negative effect on health and that in fact, increasing ROS could be helpful in signaling cellular stress. Regardless, the increased production of ROS can contribute to a loss of mitochondrial integrity and biogenesis. 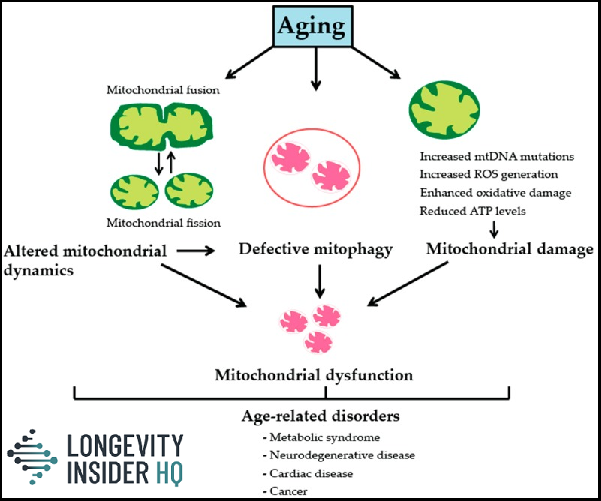 Mitochondria are capable of self-replication, but progressively become more dysfunctional with age. They have built-in quality control and housekeeping, but over time, these fail. As shown in the figure above from a research article in the journal, Genes, mitochondrial fusion and fission, a defective mitophagy process, and mitochondrial damage from increased mtDNA mutations, increased free radicals and oxidative damage and reduced ATP levels all contribute to age-related disorders associated with mitochondrial dysfunction.

How to improve mitochondrial function

While the jury is still out on exactly how to improve mitochondrial function and there is some controversy over some of the recommended treatments, there is agreement on a few ways to mediate mitochondrial dysfunction as we age.

A moderate level of eustress, or beneficial stress, has been shown to promote cellular and mitochondrial health. A concept named mitohormesis has been studied, which could promote lifespan and healthspan. A 2014 research article reviewed over 500 publications and found that, “Increasing evidence indicates. . .reactive oxygen species (ROS), consisting of superoxide, hydrogen peroxide, and multiple others, do not only cause oxidative stress, but rather may function as signaling molecules that promote health by preventing or delaying a number of chronic diseases, and ultimately extend lifespan.

“While high levels of ROS are generally accepted to cause cellular damage and to promote aging, low levels of these may rather improve systemic defense mechanisms by inducing an adaptive response.”

Many call this the Goldilocks Zone – not too little, not too much. You may find a theme after reading our last few articles: Calorie restriction and physical activity are two of the most substantial ways to maintain this balance.

Here's what I mean.