Kauai Made Me Do It

My apologies for being gone these past couple of weeks.

I decided to take a much-needed vacation, and chose not to bring my laptop. I know, these days that's unheard of. But sometimes you just need to unplug from everything. And that's exactly what I did.

Although I'm sure I racked up some heavy carbon miles with my 10-hour flight to Kauai, I did my best to avoid any excessive driving while I was there. And of course, I stuck to a local, mostly-organic diet the whole time. Not that it was difficult. In Kauai, farmers markets are plentiful, and so is the organic and "naturally-grown" produce. Here's a shot of some of our take from the Hanalei Farmers Market... 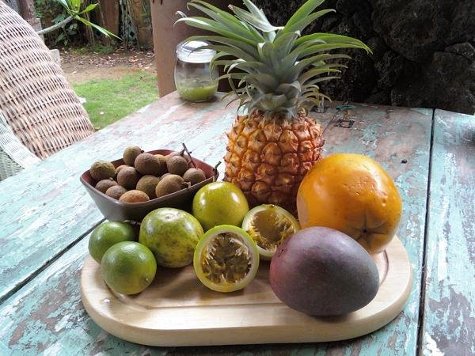 Except for the longans (in the bowl), everything else is organic. The sugarloaf pineapple, the papaya, the mangos, the liliko'i and the limes.

While on my trip, I also had the opportunity to get a private tour of the administration building for the National Tropical Botanical Garden. Why would I want a tour of an administration building? Because it's a beautiful LEED-certified building, complete with solar PV, natural lighting and a plug-in station for electric cars. I hope to have more about this building and this amazing organization (that's doing a world of good for the planet) next week.

Until then, check out some of the recent stories at Green Chip Living. Here are this week's headlines:

Have a fantastic weekend!