It took living in Iowa for four years for me to truly appreciate how lucky I was to have grown up in New York City.

Don’t get me wrong, Iowa is great. Really. Iowa City is a terrific town. I especially enjoyed picking up fresh organic produce from small farms on the outskirts of the city. That is, when they actually had something left after stocking several amazing local restaurants.

Of course, it's a bit of a misnomer call this place a city. To a New Yorker, you’re not a city until your taxi drivers start driving like they’re getting chased in “Grand Theft Auto.”

That said, when I moved back to New York, there was a gap in my heart for that delicious organic produce. Yeah, I could go to an organic supermarket or head upstate to small farmer’s markets, but being able to truly buy local isn’t really a possibility in New York. Or at least, I thought it wasn’t.  Until I discovered Gotham Greens. 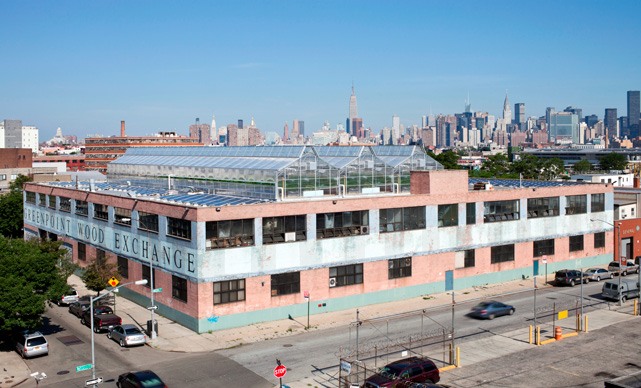 Founded in 2008, this company is out to remedy that problem.

While all the hipsters lounge about in Williamsburg, acting blasé with ironic mustaches whilst sipping a Pabst Blue Ribbon, Viraj Puri and Eric Haley set up shop in the neighboring Brooklyn neighborhood of Greenpoint with the goal of producing the freshest vegetables possible for restaurants around the city.

To achieve this, the two forward-thinking entrepreneurs began growing vegetables in a small community garden next to a Polish restaurant, and, more importantly, constructed a 15,000-square-foot rooftop greenhouse that can yield over 80 tons of produce annually.

The first greenhouse actually went into operation in 2011 and this year they're planning to open several more greenhouses.

While their current greenhouse produces Baby Butterhead lettuce, basil, Red Sails red leaf and Tropicana green leaf lettuce, the new greenhouses scheduled to open this year will expand their repertoire substantially. In addition, all of their greenhouses will function year-round.

Equally impressive is the company's commitment to renewable energy.

You see, Gotham Greens uses a 56kW on-site solar PV system that produces 70,000kWh of electricity a year. They have also designed their greenhouses in an energy efficient manner as to reduce their fossil fuel consumption for heating.

Furthermore, the company's proximity to its clients reduces long distance shipping and refrigeration that only exacerbates greenhouse gas emissions. And having lived in Iowa and seen first hand Monsanto’s stranglehold on American crops, it’s lovely to hear they do not use any genetically modified seeds or spray their crops with pesticides. In fact, they don’t use soil at all. Rather, they put the seeds into tiny sponges made from volcanic basalt while the nutrients are put into the water.

Also worth mentioning is the way in which Gotham Greens manages water.

At Gotham Greens, growers use hydroponic technology that allows them to water their entire 15,000-square-foot facility with just 700 gallons a day. This is less than a 10th of what an average farm would need.

While many associate hydroponics with marijuana production or tasteless crops, the Gramercy Tavern (an incredible restaurant if you ever happen to visit New York) is a Gotham Greens customer. In fact, chef Michael Anthony loves Gotham Greens Baby Butterhead lettuce so much, he created a salad to showcase it.

And I can honestly say Gotham Greens produces remarkably delicious food. Unbeknownst to me until a few days ago, I’ve been buying from them for months.

My local Whole Foods (NASDAQ:WFM) and even more local mom and pop grocery stores have been stocking Gotham Greens produce since they started selling it.

So if you happen to come to New York, you can go see the Statue of Liberty, the Empire State Building, Ground Zero, and Central Park. But also keep your eyes peeled for an abandoned bowling alley in Greenpoint with a cutting-edge greenhouse on top.