The U.S. Humane Society and United Egg Producers (UEP) announced yesterday their agreement to support regulations for the egg industry.

The new legislation is the first federal regulations of any kind to regulate the conditions and treatment of farmed animals — and the first dealing with animal cruelty in three decades.

So not only are these regulations long overdue, but they are the result of a truce between two organizations that are forever embroiled in political battle, each advocating the interests of their clients: chickens and the nation's egg-producing farmers, respectively.

The new regulations will ban the use of "battery cages" on farms for egg-laying hens.

Battery cages are the massive metal contraptions anyone who's seen Food Inc. (or my last article on factory egg farming) will recognize — even if you've never stepped foot on a farm. 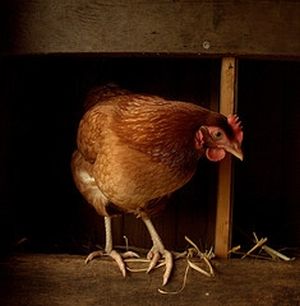 They are cramped, dark, and crowded, and they deprive animals of exposure to natural light or room to move. Essentially, the hens are forced into a space measuring 18 by 20 inches with several other animals to live a life of eating, defecating, laying eggs, and sleeping until they die.

More than 60% of the world’s eggs are produced in industrial agriculture systems, mostly using this confinement system.

Battery cages have long been a topic of controversy among animal welfare advocates, animal rights activists, and industrial egg producers and the organizations who look out for their interests.

The new regulations will replace battery cages with "enriched colony cages" over an 18-year period following the passing of legislation.

Enriched colony cages will provide each hen with double the floor space and structures for nesting, perching, and scratching.

The agreement reached by the Humane Society and UEP further calls for a ban on the practice by farmers to starve hens for 14 days as to induce a new egg-laying cycle.

The proposed regulations still have to make their way through Congress, a process that will likely take a year. But Paul Shapiro, Senior Director of Farm Animal Protection at the Humane Society, is optimistic about their passing...

These are major changes with a big price tag. Head pins the cost for farmers to implement the new cage systems at $4 billion.

But that might be a small price to pay for the improvement of animal treatment on a wide scale...

A study by the Scientific Veterinary Committee of the European Commission stated years ago that "enriched cages and well-designed non-cage systems have already been shown to have a number of welfare advantages over battery systems in their present form".

Mitch Head, a spokesman from the UEP, explained: "We know that the enriched cages seem to have a lot of advantages over traditional cage systems, and they also have some advantages over cage free... There's also the fact that a single national standard is preferable to a patchwork of state regulations — for our producers, our customers and for consumers."

And we shouldn't overlook the precedent the historic agreement between feuding political bodies could set.

While the new legislation does not regulate the treatment or conditions of chickens being farmed for their meat, there is hope for further regulation — and perhaps further compromise among animal rights activist and industrial farming organizations — for the treatment of other livestock if Congress sends it through.

Bruce Friedrich, Senior Director for Strategic Initiatives at the animal rights group Farm Sanctuary, told the Huffington Post, "97% of the American people believe that cruelty to animals should be illegal. But what happens on modern farms is completely unregulated."

There is clearly a disconnect between what people say they believe and consumer behavior... and this could be largely due to a simple lack of education and information.

How can we advocate for animal rights if we support industrial farms that utilize systems that perpetuate animal mistreatment?

An article in Psychology Today examined this dichotomy a few months ago:

In 1975, three billion furry and feathered creatures died for the dining pleasure of Americans; now, however, we eat nearly 10 billion animals a year. The reason is that the 20% drop in the number of cattle killed annually since the 1970s has been offset by a 200% increase in the number of chickens we eat. In short, as our desire to protect animals has increased, so has our desire to eat them.

Now that's not to say that "desire to eat them" is wrong. But lessening the gap between what we say we believe and what makes its way to the dinner table — or who makes their way to a position of power in federal regulation — is something we can all partake in.