Farmers' Markets of the Future

The Baltimore Farmers' Market convenes in the shade of the Jones Fall Expressway downtown every Sunday morning, from 8am until noon, starting in May and going through December.

Here, dozens of Maryland farmers and their families unload trucks of produce, spices, and other goods…

Families from Baltimore County drive in to have Thai dumplings and noodles from the food vendors and buy fresh flowers and coffee from local Zeke’s stand at the entrance of the market.

Farmers’ markets across the United States take on various shapes and forms, depending on their wares and available real estate.

Baltimore’s traditional place for organic shopping has long been underneath the viaducts of the expressway which runs north to south through Charm City.

D.C.’s Eastern Market has expanded outside of the four walls of the original market building erected in the Capitol Hill neighborhood of the Capital City in 1873. Vendors and artisans now spill into the surrounding streets and sidewalks.

There is something simultaneously hip and antiquated about going to a market with a bag to buy your produce for the week from the local farmers. Consumers are finding local farmers’ markets not only superior in terms of price per pound, but superior in quality. A shorter life in the bed of a delivery truck means apples and pears stay perfectly ripe for much longer than on grocery shelves.

But while the farmers’ market seems to have a definitive role in a community’s landscape, it’s hard to guarantee they have a place among growing and developing urban areas.

As downtown areas grow and city centers make way for parking garages and expansions, farmers’ markets are being forced to shift locations.

The City of Toronto flattened the building that housed their farmers’ market years ago to make room for a one storey concrete structure. It was more of a shed than a building, and it seemed to shout that the market was not a priority for the city, that it was expedient and just needed somewhere to take place.

Single-storey buildings don’t have a prominent place in Toronto’s city center, however... So the city recently decided to give St. Lawrence Market an overdue makeover.

Toronto hosted a competition to propose a design for a structure that would allow the market to go on with business as usual, but as an integral part of other “downtown city business.”

The winner of the competition is Rogers Stirk Harbour and Adamsons Associates "Red Team" entry. 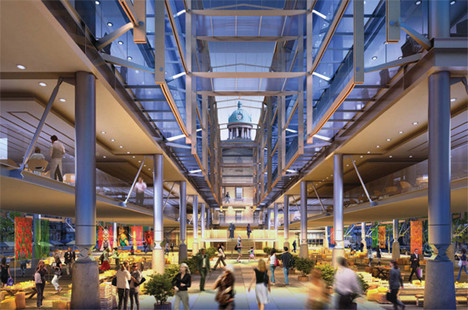 The winning design proposes a four-storey building that allows for the market to take place in the lower level, while outdoor seating surrounds the structure and business in offices and state departments takes place in the upper storeys.

Shoppers are able to view the three main streets in downtown Toronto within the glass atrium of the structure, which also creates an open indoor market with an outdoor feeling — plus lots of natural light and protection from the elements.

According to one source, “Shoppers will also be able to see the South Market from inside the building and appreciate a dramatic view of St. Lawrence Hall to the north, creating a strong visual connection with all three buildings of the complex.”

The structure is designed as such that Toronto’s courthouse is on the top level and parking is underneath.

If this is the future of the farmers’ market, I look forward to joining George and Judy Jetson while they shop for organic melon.