Dreading Your Next Colonoscopy? This Surprising Biotech May Do the Job

When’s the last time you had a colonoscopy?

If you’re like most folks, it’s probably not an appointment you look forward to…

It can be a very invasive and uncomfortable process.

Over four years ago, Brazil approved of one unlikely technology that makes the process so much easier.

In fact, Loyola Medicine’s digestive health program is one of the first in Chicago to offer the method.

Apparently, one single pill can do the trick. 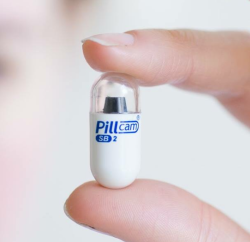 But it’s not just any kind of pill — there’s a camera inside it!

You swallow the pill. It then takes thousands of pictures as it works its way through your system.

Then, the data is transmitted to a recorder the patient wears around his or her waist.

Not only do doctors deem capsule endoscopy (the tech term) comparable to traditional colonoscopies, but some say it has other advantages...

With it, doctors can check the small intestine and other areas that they wouldn’t be able to reach otherwise.

Here’s the entire process of how this tech pill works.

After nature takes its course, the pill comes out the old-fashioned way...

When it comes to pooping, most associate the act with toilet paper.

But one doctor says that bidets are much healthier for you.

Charmin and all these brands have done a great job making us think that toilet paper is hygienic. It's not.

Dr. Evan argues that, where as a bidet cleanses your nether regions, toilet paper merely smears around the fecal matter.

That really paints an ugly picture, doesn’t it?

And yet, the average American still uses three toilet paper rolls every week.

Most of the public probably associates bidets with the elite or wealthy.

Most people simply do not see the value in buying and installing a bidet in their home.

Also, other experts argue that there isn’t enough data to prove that bidets are healthier than toilet paper.

So which is the better option — toilet paper or a bidet?

I’m simply here to provide you with information…

The choice is all yours!

Hear out his argument for yourself.

So keeping with that trend…

Many associate the naked body with a variety of things.

But experts suggest there are healthy benefits to being naked.