After a lunch of fish tacos stuffed with fresh cilantro — easily my favorite herb — I returned to my desk to a worrisome headline...

"USDA testing finds 30-plus unapproved pesticides on the herb cilantro"

Even for conventional produce, that seems like a hell of a lot of pesticide.

The results were from the USDA's Pesticide Data Program, which examines around twenty different fruits and vegetables every year.

But how do other herbs stack up against cilantro?

We don't know. In the twenty-year history of the USDA's testing program, this is the first time they've ever tested a fresh herb.

Of the almost 200 cilantro samples analyzed, 94% tested positive for at least one pesticide.

And as the Chicago Tribune notes, some pesticides found were well over federal limits:

One insecticide found on 37 percent of the cilantro samples, the organophosphate chlorpyrifros, is approved for cilantro but, in at least one case, was three times higher than the EPA's established limit for the herb. 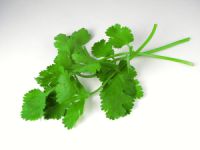 USDA researchers also noted that washing the produce did not remove those unauthorized pesticides.

"And if people are very, very concerned, then choosing foods that are grown organically is another option," Bill Jordan, a policy advisor to the EPA, told The Tribune.

Considering that only one sample of the organic cilantro tested positive for unapproved pesticides, you'd think officials could make a more robust case for organically grown food — at least in this instance.

Cilantro is near and dear to me. Even as I write this, I have a skirt steak marinating in garlic, lime and the green herb.

My cilantro comes from my backyard and it's cheap, plentiful, and pesticide-free.