The earthquake in Haiti will surely go down as one of the most terrible tragedies of the new century. Thousands of refugees have been left homeless, penniless, and starving.

Almost four months after the disaster that killed as many as 230,000 Haitians, up to a million more are still living in squalid tent cities devoid of potable water, food, and medical aid.

With a group of people this desperate, surely any offer of food aid would be welcomed with open arms...

But not if those supplies are coming from agricultural lightning-rod Monsanto. 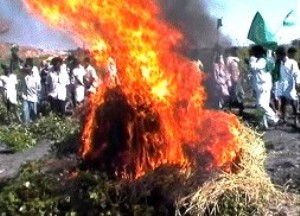 Farmers are especially concerned about Monsanto's encroachment into their livelihoods because Monsanto's patents restrict farmer's ability to reuse seeds.

That means farmers must purchase a new batch of seeds each time they plant a crop. With Monsanto GM seeds costing three times more than traditional ones, this poses obvious problems for poor farmers like those that comprise the MPP.

Haiti is certainly not the first country to fight back against Monsanto's agricultural practices.

Earlier this year, Green Chip Living wrote about Indian farmers who took to the streets and burned effigies to protest Monsanto's attempt at introducing genetically modified eggplant into the country.

There is also growing anger over Monsanto's potential role in the 200,000 Indian farmers who have committed suicide since 1997. Critics say the non-renewable nature of Monsanto's GM seeds create a "suicide economy" that drives these farmers to bankruptcy.

It is a fate that Haitian farmers are desperate to avoid, however dire their current situation may be.

The Haitian Ministry of Agricultural outright refused Monsanto's first offering of Round-Up Ready GMO seeds. After some negotiations, however, they did approve the shipment of Monsanto corn hybrid seeds, which were treated with Maxim XO, a fungicide.

An EPA study in rats concluded that exposure to thiram caused "weakness, ataxia, [and] varying degrees of hind limb paralysis." The agency went so far as to recommend that even workers handling EBDC-treated plants wear special clothing to protect themselves.

Not exactly the kind of thing you want genetically mutated into your crops...

But the bottom line, according to Jean Baptiste, is what Haiti needs isn't controversial aid packages — the nation needs long-term agricultural solutions.

"Fighting hybrid and GMO seeds is critical to save our diversity and our agriculture," Jean-Baptiste said in an interview in February.

"We have the potential to make our lands produce enough to feed the whole population and even to export certain products. The policy we need for this to happen is food sovereignty, where the county has a right to define it own agricultural policies, to grow first for the family and then for local market, to grow healthy food in a way which respects the environment and Mother Earth."

And as far as Jean Baptiste and the MPP are concerned, Monsanto has no place in Haiti's agricultural heritage.